I haven’t had much time to blend the last few days, but I did make a few more adjustments to gardenia. I decided against the additional balsamic ingredient I tried in it, and instead I increased the sandalwood to give the extra oomph in the base that it needed. I may take out the beeswax after all to cut sweetness, but the beeswax should be nice in Jour Ensoleille. I increased the ambrette seed a little more in gardenia because it helps bring out the little nutty sandalwood aspect in the base and because it’s relatively dry. I really like this mod — it has much more oomph, which solves the problem that had been worrying me. I’ll test it the next few days and see if it is ready to share and if the sandal is optimized now (I’m comparing a couple little variations on the sandal accord in it).

The gardenia opens with a true gardenia and gradually the jasmine and tuberose come out more, and then as time goes on the orange blossom lasts the longest, but the gardenia notes do persist at a softer level. It has a little stronger woodsy base than I’d envisioned, but I think that helps make it more substantial and I prefer that to a vanillic base or a balsamic salicylate-rich base. I’ll have to decide if Gardenia Musk is still the best name for it when it’s done. I’m also still waiting on a kilo I need for this formula.

I have a little trial pot of some tobacco flowers in bloom on my porch, grown from seed as an experiment. Their scent is strongest in the evening and they’re interesting since I’ve never tried them before.

Making progress on things and hope to have the paperwork project under control before too much longer. We’ll have to have a party on the blog when gardenia is done, lol. 🙂

I’m excited to start making testers tomorrow of two new summer scents, one floral and one not. The floral will be for the Boutique Collection and the non-floral will be for the Sonoma Exclusives in both perfume and lotion. I worked on both scents last summer but didn’t have time to finish them until now…. 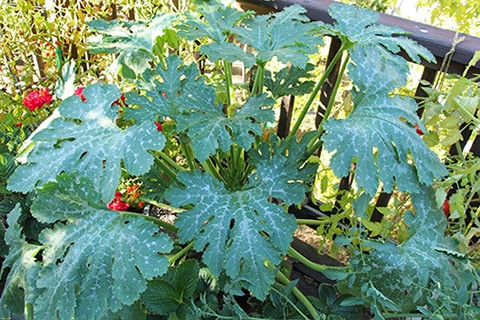 We’re trying a new zucchini seed this year developed especially for container growing, and the plants are great — giant decorative foliage with abundant zucchini tucked into the center of the bush. The variety is called Astia and is sold by Renee’s Garden seeds. If you need to grow your veggies in pots, this is…

I’m busy with orders and working on new scents as I can. Still waiting for the drywall man to come back and make the final repair so I can put everything away again. I love the new closet doors though! I try to squeak out all the storage space I can. I’m trying the new…

My cds email has been down all day; I am giving up on it because it has been down too frequently. I will only be using my hotmail and my info@sonomascentstudio.com accounts in the future. Please make a note of this if you usually contact me via my cds1.net address. Thank you! Luckily the other…

I finally had a chance to work on Gardenia Musk on Saturday and Reves on Sunday; I can’t wait to rest my nose overnght and try these tester vials tomorrow. With Reves, I substituted a more floral ionone for one of the woodsier ones and made a few other adjustments, trying to prevent the orris…

New bottle update: I’m going ahead with the gold foil labels even though they are a little more involved to produce. They do look nice. As shown in the photo, I’m making the border a tad narrower than the previous picture I posted a week ago. I have the first small test batch of labels…