Here’s an interesting interview Nathan did with Franco Wright of Luckyscent and Indie Scents. Nathan has been doing a series on artisan perfumers, and this installment looks at the market from the niche retail side. I found it interesting that they’ve seen growth in gourmand and unisex scents but a decline in interest in big florals. Most of the excitement on blogs does seem to be generated by woodsy scents, though a few florals sneak in.

And in other news, upcoming Lutens releases are reported to be warm buttered toast (Jeux de Peau) and carnation (Vitriol d’Oeillet). I still haven’t tried the last few yet… Looking forward to trying Boxeuses.

A new sample service for niche/artisan fragrance is debuting this month, and the site’s product pages are going live today. It is called Olfactif. Each month they will mail three samples to subscribers, and Fig Tree is in this month’s debut box. The other two scents for this month are L’Artisan’s Voleur de Roses and…

I thought this was an interesting blurb in Perfumer and Flavorist about how natural ingredients are being tweaked to de-color them or remove allergens or change the scent profile in some way (such as removing the dirtiest part of patchouli).   Jean Claude Ellena has discussed doing this to design custom natural components in his perfumes;…

I’m sorry I’ve been scarce lately. I’ve been busy getting ready for next week’s event at Jessup Cellars in Napa as well as keeping up with orders. The photo above shows the making of carded sample sets for the Jessup event (before sorting into sets of five). I’ve seen a few interesting reads in the… 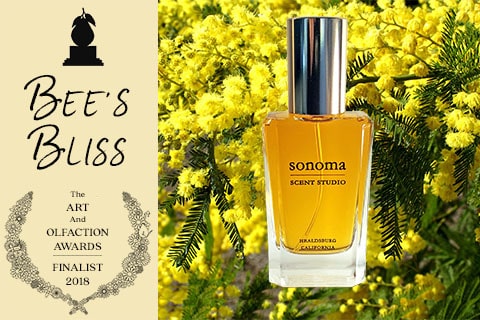 I’m very happy to announce that Sonoma Scent Studio Bee’s Bliss is a Finalist in this year’s Artisan Category of the Art and Olfaction Awards! I’m so pleased and excited — this recognition really means a lot to me. The 2018 Finalists were announced in a special press event at Esxence in Milan today. The Fifth Annual Art and Olfaction Awards event…

The Elements Showcase trade show will be held in NY next week, and the Indie Fifi award winner will be announced at the show. This is the second year that the Fragrance Foundation has had an Indie category in the Fifi competition. Indie perfumers enter their own perfumes into the competition by paying the entry…